In 2013, results of interesting experiments were posted on one of the Russian raw diet forums by Janara, who’s a cynologist: https://rawdiets.wordpress.com/dogs-healthy-nutrition/. Through a series of experiments with dogs she has confirmed that the “living” and raw zero-carb diet consisting mainly of meat is the best diet for dog’s health. Her 2-year-old dog was cured of piroplasmosis (dog’s infection) just from eating raw food for 3 days without any help from the veterinarian.

Janara brought in a new pup that was highly contaminated with worms and fleas. She didn’t separate him from her other pack of clean and healthy dogs. She fed the pup the same raw, healthy food. The pup didn’t contaminate her other dogs, became free of all parasites and completely recovered within one month. Janara concluded that parasites can affect us only if our diet is wrong.

Janara’s experiments confirm that parasites do not like raw food and cannot live inside a healthy body, receiving proper nutrition. Parasites will get dissolved with strong stomach acid (raw, mainly animal food diet produces the strongest stomach acid) and/or they just leave the host’s body without any medicines, herbs or devices.

Part 2. Toxins Affect On Animals And The Parasites They Harbor (renewed on January 30, 2019)

In nature, wild animals cannot get proper food every time. Often, their food is contaminated by dirt, dust and various organic remains. Some of them are difficult to digest and assimilate or remove. Also, the immediate environment and the food itself always contained toxins which collect inside the animal’s body to this day. These toxins are surely poisonous or at least damaging to the animals in one way or another. This is precisely why parasites have existed with us since the dawn of time. They help to digest and store or remove some substances including toxins that the animal’s body cannot absorb. If the toxins have accumulated excessively and pose a threat, the body allows parasites to remain and reproduce.

Here’s one such example where parasites benefit sharks infested with heavy metals:  https://www.nature.com/news/2007/070625/full/070625-1.html?fbclid=IwAR2D6HydYo6amQHj5wz_zlR0gips6jvidfgtQoiVJsAfyzJX2VkYD44I4PE. When the number of toxins decreases, the animal’s body starts to remove parasites, using its natural abilities. Some animals use special herbs to help their body eliminate parasites. It’s logical to conclude that this symbiosis with parasites has existed for millions of years.

People have always had many kinds of parasites. Parasites usually behave themselves and are very quiet if they do not reproduce too much. 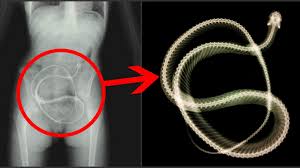 Hence, you can live all your life and not even know you have parasites inside you. In fact, today, most people contain at least one type of parasite no matter what part of the world they occupy. It’s a fallacy to think that only third world countries are infested with parasites. Parasites help clean our intestines and other organs from toxic build up that the body cannot absorb. But, unfortunately, if there are too many of them, they can shift the balance of hormones/electrolytes and affect the body’s functions including the mind and personality (for example, Toxoplasmosis, Candida, etc. https://www.sciencedirect.com/science/article/pii/S0889159118306998).

Consequently, this path of cleaning the body is not only compelled but also dangerous especially when improper food consumption continues.

Here’s an example of where parasites benefit the host with Crohn’s disease:(https://www.ncbi.nlm.nih.gov/pmc/articles/PMC1774382/?fbclid=IwAR3UYMT_glYRdvRUwQhEBXMMSYzMN_ePL2L8ibrQfVD7nAYM1x4AfqYCAhs).

The danger of parasites is highly overblown for those who wish to follow a raw, zero carb diet. I have gone on a quest in some Facebook groups to uncover exactly how many people would report they are infected with parasites while adhering to raw, zero carb, meat diets. Many of these people sincerely wrote a lot about their diseases and health difficulties. I have read many of their various posts about parasites and their influence but I found only a few posts where a member of the group wrote that they were infected (or thought they were infected) with parasites through the months or years while on the raw version of the group’s special carnivore diet. The number of members who got parasite infections from cooked food or mixed raw and cooked food was relatively higher but on the lower side nevertheless. Additional information can be obtained here: https://www.youtube.com/watch?v=BM1FIbSsLpg&fbclid=IwAR3fCtAHcrOJExjrz4aBo4ie8UOO8qnIhfNpBlWuB8eiVft-dRORsTAnIq0, https://www.youtube.com/watch?v=SirL-rxLhzs.

The internet is full of partly fake x-ray images of people having bodies and brains full of parasites and cysts. These pictures would perhaps truthfully represent only a fraction of folks who eat cooked food or maybe a mixture of mostly cooked and raw food. People on raw, species-appropriate food and animals in the wild never have anything even remotely close to what you may have observed in those images. This has been well established and confirmed by the long experiences of big groups of people eating raw food.

Naturally, parasites prefer to move in and make their home inside people who eat cooked and processed food. If you are still afraid of parasite infections, you can eat defrosted meat and fish only which has been previously frozen for at least a few days. Freezing kills the parasites and their cysts but, unfortunately, it doesn’t kill pathogens. However, at least it stops them from reproducing and multiplying.

If you buy already frozen meat/fish, you should not freeze it again. Once it has been defrosted, you must either eat it or keep in the refrigerator for a short period of time.

This site uses Akismet to reduce spam. Learn how your comment data is processed.